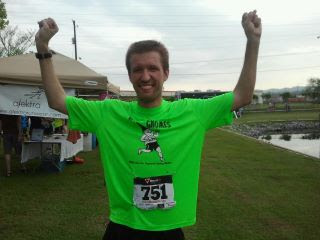 EDIT: This is my 2nd most widely read post.  I want to express my heartful thanks to my fans and followers.  It really means a lot that people were inspired by this post.  I know that I probably will never meet most of  you in real life.  I intend to beat this time down the road.  Hopefully, sub-19.
Background:
Back in October of '98, I set a PR at a cross-country invitational with a time of 19:13. It would be my last good race of the season before I succumbed to adrenal fatigue. I had broken 20 minutes countless times since then but for more than 13 years, 19:13 stood as my PR. I have set many PRs at longer distances but had yet to approach my times at distances that I actually raced in high school. After coming close several times in previous years, I really wanted this one badly.

History:
The first race of my comeback came in November of 2006 (24:55), which showed no indication that I would approach my PR again. My next 5K was better (22:17) next summer at the Twilight Retro Run but a full minute per mile was light years away. It was not until the next year, also at Retro (20:11) that I actually believed that I might have a shot down the road. I was well aware that the last minute would be the toughest. I worked my way down to 19:27 the following year but due to a string of bad luck with 5Ks, I managed to cut just 6 more seconds over the next 2 years. I began 2012 red hot and had targeted this race as my best chance of the Spring.

Training:
I still have a solid endurance base from half-full marathon training but had only just re-started interval work about a month ago and really only had 2 good speed sessions. Enough work for a fast 5K? I hoped so. I hit a couple of bumps along the way but it was still a pretty good cycle overall, just not quite as strong as leading up to 3M and Mercedes. Most people from the track club were out there today as this is Birmingham's 3rd largest event. Only Mercedes and Vulcan have more participants. I did not feel very good warming up and was much more nervous than usual at the starting line. Just get this over with 19-20 minutes of pain and it's over.

Course:
3/10 in difficulty. It was flat-very gently rolling with the exception of 2 bridge crossings. The first of which came early but the second came at the worst possible location (2.5 miles). From there, it was back down, a turn and long straightaway to the finish.

Race:
I lined up at the front and got a good clean start, which would prove to be very valuable in the end. As we approached the first bridge crossing, I estimate that I was probably about 15th overall. I reminded myself to relax here and not use too much energy going up the hill. I looked down and saw a split just under 90 seconds for the first quarter mile. Just where I wanted to be. As long as I could stay within shouting distance of 6:00 pace and hold it, I was golden. Unfortunately, the sun broke through toward the end of the first mile. The temp was only in the mid-upper 60s but the roads were still a little wet from yesterday's rain. I'd have some humidity to deal with but at least the winds were calm. Throughout much of the race, I held my position. I was chasing a small group that slowly pulled away and heard labored breathing behind me but was not passed until Mile 3. This time, I set my watch to track splits in kilometers rather than miles. I wanted to make a push just after 2K because that's where I normally start to fade. I ended up gaining a couple seconds going down to hit 1K at 3:43 then the first Mile passed by in 6:02. I was basically in line with previous efforts. The breathing was well controlled but lactic acid was building in my lower legs. Still, the pain was manageable and I anticipated that the fade would be gradual. My split for 2K was a still respectable 3:49 (7:34). Time to push it now. It wasn't much of a pace increase. I was working hard to maintain it but to my relief, I saw my split at 2.5K to be a strong 9:23. I was still on pace for a sub-19 but realistically, I didn't think I could hold it. Could I hang on and stay just a hair below 4:00/K and get that PR? It appeared that the course would be measured around 5.05K. How many seconds would that cost me? My strong math skills failed me this time. There comes a time in a 5K, usually just after Mile 2 that you just want the pain to end and time becomes less important. I passed 2 Miles in 12:14 (6:12) and I knew how close it was going to be but I just could not find much there. 2 runners passed me just before the dreaded 2nd bridge climb. I repeat that this is the worst time of the race for a hill. 2.5 miles (4K) into the race now and I did not fight this hard to give up in the last kilometer. Let's go. Run through the pain. I managed to re-pass the 2 runners but the push up the hill would cost me on the sprint to the finish. To make matters worse, on the way down, I began feeling some intestinal discomfort. I'll be tasteful here but you really can't dig too deep when sprinting to the finish. Fortunately, I stayed clean and the finish line was in view. At first, it seemed like I had it in the bag then I remembered that the course would be measured a tad long. I've got to get there in time. One last drive. Is it enough? My watch read 19:14.0 at the line so I would have to wait until the official results. Maybe my chip time was faster. I only needed 1 second to tie and 2 to break it. Officially, I tied it. That's good enough for me. If not for the final hill and the "other issue," I had a 19:0x in me for sure. In the meantime, I'll be more than happy with the tied PR since it was such a long time coming.  I heard a rumor that all fractions are rounded up.  Thus, a 19:12.3 goes on record as 19:13 so I'm counting it.   I believe that I have a sub-19 in me. If it happens, great. If not, this is still worth celebrating as a PR.
18th overall (13th among men). 3rd in AG
Mile splits (course markings): 6:02-6:12-6:20-39
Kilometer splits (GPS): 3:43-3:49-3:47-3:54-3:52-12 (last .05).
Next up is the Crescent City Classic (New Orleans 10K) next Saturday. It will be my best and perhaps last chance at a sub-40 before the summer heat. It will be a very difficult goal but not impossible if I have A+ stuff. The fact that my pace today never went above 4:00/K bodes well.
Posted by Crazy J at 9:15 AM