I caught a 6 AM flight out of Birmingham on Thursday and landed in Albuquerque just before 10 AM local time after a short connection in Dallas.  From there, I took I-40 East to Amarillo, Texas in my Toyota Camry rental car.  Albuquerque has some nice mountain views but once you get east of the metro area, I-40 is not particularly scenic.  The terrain is very arid and mostly flat with scattered bushes dotting the landscape.  The Texas panhandle is a bit more grassy and has the feel of the High Great Plains.  You will hear some southern accents in this area but that does not extend far into New Mexico if at all.  With the possible exception of the extreme eastern part of the state, New Mexico has a strong Spanish and Native American flavor.

As expected, after losing an hour going back to Central time and a stop for lunch, I did not get into Amarillo until it was almost time for dinner.  As planned, I stopped at the world famous Big Texan Ranch, which offers a free 72 ounce steak to anyone who can finish it within an hour.  According to my server, about 1 in 10 who take on the challenge actually succeed.  I did not try it but did enjoy a tasty 18 oz Ribeye cut.  From there, I took a short driving tour of downtown then stopped for a drink in the Route 66 entertainment district.  Nothing much was going on at this hour and I was getting tired after a long day so I went back early. 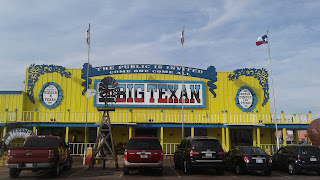 The next morning after a junk run in the dark, I went about 20 miles south to Palo Duro Canyon.  I planned it to arrive right around sunrise and timed it almost perfectly.  I took a few short hikes and got some pretty nice shots while I was there but finished up earlier than expected so I altered my plans a bit.  Instead of stopping at Sandia Crest, I would drive directly to Santa Fe and do my touring there in the evening rather than the next morning.  Probably a good call. 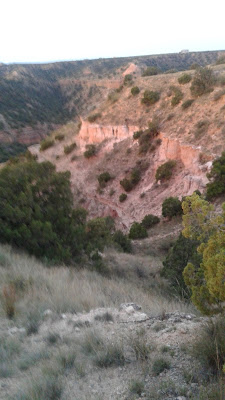 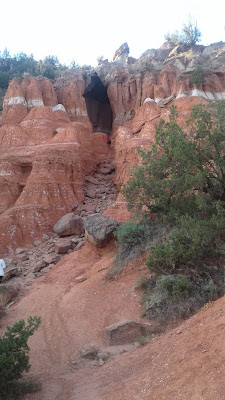 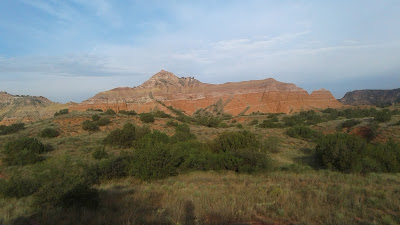 I took State Hwy 104 instead of the Interstate, which was a 2 lane road with a 55 mph speed limit but a lot more scenic.  I arrived in Santa Fe by late afternoon, checked in to Motel 6 and just walked to the downtown area.  Every building was done in the adobe/pueblo style with no real skyscrapers which made for interesting scenery.  The highlight was the plaza area, which featured some nice restaurants and bars with lots of southwestern and Native American jewelry shops.  None of that was of particular interest to me but I did enjoy a tour of the New Mexico history museum.  It was almost dark by the time I got back so again, I timed it perfectly.

The next morning was a beautiful drive through the Turquoise Trail (US-14) from Santa Fe back down to Albuquerque.  The highlight there was a 14 mile spur road to Sandia Crest, which is 2 mile high altitude with smaller mountain peaks below and the city of Albuquerque visible in the distance.  Flat out beautiful!  I arrived in Albuquerque around lunch time and headed to Old Town for a fish sandwich.  I found it to be a smaller version of Santa Fe so after a quick walking tour, I went back to downtown and checked into my hotel.  Next, I met up with Run University Group to celebrate my friend Micki’s 50th full marathon state.  I caught the end of the Alabama/Tennessee game then went out to dinner with the group.

The next day was race day.
I felt strong warming up and believed that in spite of the 5000 foot elevation, I had a good shot at a post-35 PR of 1:44:38.  Those thoughts went out the window in just a split second.  Just like I’ve done over 100 times before, I did a few hard strides after an easy warm up jog just to confirm that I was ready to go.  This time, I felt a stabbing pain in my lower left hamstring.  OUCH!  What bad luck!  I briefly considered bailing and heading back up to my hotel but found to my relief that after a couple minutes of easy jogging, the pain was still there but was not disabling.  I would give it a shot.  If worse came to worst, I might have to walk it in but I still get credit for a finish no matter how long it took.

After a slow and cautious start out of downtown into a residential area, I found some open space and began moving surprisingly well.  I aimed for about a 7:45 pace and got to the first mile marker 3 ticks south of the plan.  I probably looked normal to most racers with no visible limp but every step was painful.  It never did let up all race but thankfully, it never forced me to stop either.  Another factor in my favor was a nearly dead flat course.  The few climbs that did come were short but man, they hurt so much.

In Mile 3, we turned on to a bike trail and it would be out and back the rest of the way.  It was here that I could feel it slipping away and another 10+ miles seemed insurmountable.  The left hamstring never really got much worse but the other muscles along with the right hamstring and groin were getting quite sore from compensation.  Mile 3 would be my last sub-8 Mile on the day but as we approached the midsection, I found to my surprise and relief that I was still holding a semi-respectable pace south of 8:15.  A non-disastrous finish was now a reasonable expectation.  At the halfway point in 52:20, I was still on pace for a sub-1:45 but realistically it would be a finish in 1:45 or 1:46.

I felt like my energy was fading further in Mile 8 and I took a gel hoping to get a small boost.  Probably a bad call there.  I’m not sure if there was a connection but I felt significantly worse shortly thereafter.  The pace slipped to the 8:40 range and Mile 10 was over 9 minutes.  Uh oh!  I’m going to need a rally just to break 1:50.  In the end, I did find a little bit of extra juice after turning back off the bike trail into the residential area.  As we approached town, I saw that I had a full 5 minutes to run the last half mile so it was never in danger down the final stretch and the Mile markers were accurate to my Garmin with .02 all the way.  I managed a mild pick up at the end but was in no condition to get on my toes and sprint.  Mercifully, I crossed the line with a time of 1:49:18 (8:20 pace). 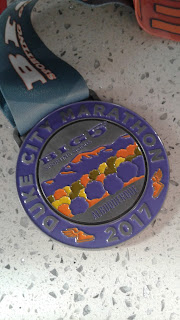